Design of Information just get’s more interesting! For our 3rd homework, we had to take Shakespeare’s plays (XML-d by Jon Bosak) and display their data in some interesting way. I went with Android as it’s the medium I’m most comfortable with. Soliloquy is the app’s name and it was churned out in about 6 hours (I’m amazed it went that fast).

Soliloquy is an Android application that tries to analyze each one of Shakespeare’s plays for soliloquies. It displays what it finds in a “time line”. The x-axis spans from the first to the last line of the play. The x-axis is colored whenever a soliloquy is detected. This leads to a spatial sense of Shakespeare’s method. The user can observe patterns in soliloquy occurrence and length.

The user may interact with Soliloquy by touching and dragging the handle on the left side of a list element. This will free the element from its position in the list and allow the user to move the element to a new location. This allows the user to group plays by pattern. Shakespeare follows a methodical approach to writing tragedies and comedies. Soliloquy allows the user to detect these and organize them. After organization, a pattern should be visible by comparing the two plays side-by-side.

Clicking on a play will bring up all of the soliloquies for that play, where they may navigate through them by scrolling. 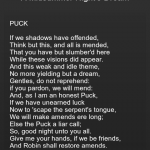 The application first performs a setup where it parses each play. This is broken up into multiple threads to allow the user to read the instructions while waiting using Android’s AsycTask. I highly recommend it over normal Java threading. 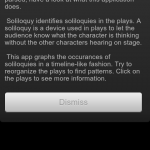 The parsing is done using Java’s SAX Parser. The title and number of lines are recorded for each play. Soliloquies are detected by watching for <STAGEDIR> elements containing “Exeunt”. I noticed that if a <SPEECH> element appears directly after a <STAGEDIR> containing “Exeunt”, a soliloquy usually follows. Obviously this process is not perfect, but it seems to grab most of the big ones. For example: all of Puck’s soliloquies are detected in A Midsummer Night’s Dream. Each soliloquy goes into a Block data structure. A Play structure holds a list of Blocks.

The resulting plays are then displayed using a custom View that draws rectangles with the same width and spacing as the soliloquies occur in the poem. This TimelineView is part of a custom TouchListView’s items. TouchListView allows the elements to be reordered is courtesy of commonsguy on GitHub. 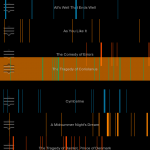 The code is very simple, with an MVC architecture similar to most other Android applications. SoliloquyActivity.java is the entry point, and ParserHandler.java contains most of the XML parsing code. PlayAdapter.java is the model that the list adheres to.

Overall I think the code is clean. I’ve got it under git and might improve it for fun later :D.