aVoice is a Google Voice client for Windows 8. It makes use of some neat interaction paradigms:

The video doesn’t show pinch-to-zoom in, but that’s also possible. In the world of touch, these interaction paradigms are pretty new and they aren’t yet mainstream. I’ll tell you how they’re working for aVoice and some pitfalls to avoid.

I’ve seen two uses for it over several platforms:

A heuristic I think applies heavily to the information filter semantic zoom is recognition rather than recall (#6). The Windows 8 start screen does a great job of letting the user recognize what app they’d like in the zoomed out view by creating the illusion that the user is merely optically zooming out, but being a bit smarter. They disable live tiles and replace them with a small version of the app icon: 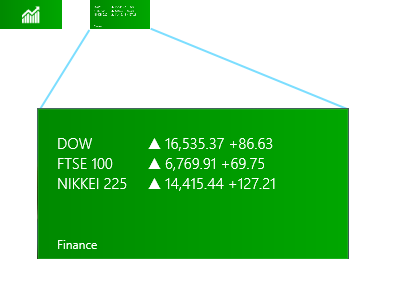 Above, on the upper left is a screenshot of what the Finance app looks like in the zoomed out view (62px x 30px). On the right is what it would look like if the Finance app’s live tile was left on and simply shrunk. Obviously, the left retains meaning while the right does not.

This trick let’s the user recognize where they are spatially and recognize an app by its color and icon.

Unfortunately, aVoice doesn’t work the same way. When zoomed in, messages are in a horizontal stack. When zoomed out, they are in a grid, similar to the start screen. This breaks spatial recognition, and probably explains why I observed friends exclaiming “Wait, where was I?” when using aVoice. In a redesign, I would probably scrap the semantic zoom. It is ill suited for this case. So use caution when considering the information filter style. It could end up being more confusing than helpful.

Press-and-hold is the standard selection pattern for iOS (jiggle mode) and Android, but there’s plenty of debate about it.

Swipe to select takes a different approach, allowing users to flick and item down or up to select it. It’s significantly faster than press-and-hold (check out the video here, under Swipe to select, command, and move). However, swipe to select has some issues. Here are a few that I’ve seen with aVoice:

Press-and-hold results in a hint that you should swipe down, but still doesn’t select the item. This goes against the consistency and standards (#4) of the popular market and ideally aVoice would allow both methods.

Error recovery (#9) is super important to keep a stress-free experience. The accidental selections while panning is worrisome, but fortunately recoverable via the Clear Selection button. If you use swipe to select, be careful about letting it do more than select because the action is frequently unintentional.

RingPack just underwent a major overhaul. With large amounts of code churn, it starts to become likely that new bugs will be introduced (especially Android’s fragmentation problem). This update was no exception — within 3 hours of pushing a live update, I saw a new crash, a few angry reviews, and one very upset email. Yikes!

There’s a powerful lesson here. Budget time to rapidly respond to user issues on a new release. Luckily, I did. The telemetry data from the Android Developer Dashboard and Google Analytics let me respond within hours.

The surprising thing is how quick users are to forgive once they realize you’re willing to work with them. Even something so impersonal as replying to their review does a lot to diffuse the situation. Of course, your mileage may vary depending on how critical your app is to the user’s life.

I was curious how quickly people would upgrade. The answer is — not very quickly.

Roughly 700 users saw the update and gave it a try. Amazingly that’s only about 5% of the user base. I see that as both good and bad. On one hand, lazy updating means more users with a sub-par experience. On the other, it’s nice that only 5% hit the nasty crash in version 8.

Following these rules can quickly reverse the damage done by a rocky launch.

Check it out on Quora.

There are multiple explanations for how to use IDisposable. I get it now, so here goes:

The complex bit here is the trust that all IDisposable objects behave like this. Basically, an object should never let itself leak an unmanaged resource. Thus, it frees unmanaged resources both when Dispose() is called and on from the Finalizer.